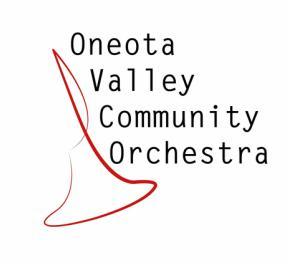 Everyone is invited to join the Oneota Valley Community Orchestra for their season finale concert on Sunday, April 28th at 2:30 pm.  This wonderful concert featuring a new work by composer Joshua Reznicow, narrator Robert Wolf, and soprano Diana Stoic will take place at Decorah High School Auditorium and is free and open to the public.

The OVCO will begin with A Symphonic Overture: Themes of the American Spirit, a new composition by Joshua Reznicow. This exciting piece celebrates and brings to life the spirit of America.

A native of the Twin Cities, Joshua Reznicow holds a BM in string education and composition/theory from the University of Northern Iowa, and a Masters in Arts and Teaching from Coe College. Reznicow is currently Director of Orchestral Activities for the Linn-Mar Community School District in Marion, Iowa as well as adjunct faculty at Coe College in Cedar Rapids. As a composer, Reznicow has written several works for professional and young groups alike including pieces for film, piano, various ensembles, orchestral, band, and choral works. He has been performed and commissioned by the Iowa All State Orchestra, the Iowa Composer’s Forum, the All-Kingdom Music Festival Orchestra in Dhahran, Saudi Arabia, the National High School Music Institute at Northwestern University, SCIBA Band Association, the Austin Chamber Music Center, the Houston School for the Performing and Visual Arts and the Fort Dodge Symphony.

The OVCO continues with Knoxville: Summer of 1915.  This richly textured piece by Samuel Barber sets music to the prose poem of the same name and depicts an evening in Knoxville, Tennessee.  The OVCO is proud to welcome soprano Diana Stoic.

Described as “utterly luminous”, soprano Diana Stoic is a versatile performer who has been seen across the Midwest and Chicago-area. Ms. Stoic performs with many local opera companies in the Chicago-area, most recently with Third Eye Theatre Ensemble.  She has sung extensively with Des Moines Metro Opera and has sung with many musical organizations including the Fort Wayne Philharmonic, Illinois Philharmonic, Civic Orchestra of Chicago, Chicago Sinfonietta, DuPage Symphony Orchestra, Musica Lumina, Salt Creek Chamber Orchestra, Petite Opera Productions, Chicago Fringe Opera, The Lira Ensemble, Light Opera Works, and The Savoy-aires.  Among her highest achievements, Ms. Stoic appeared in the ensemble of The Lyric Opera of Chicago’s production of Rodgers and Hammerstein’s Carousel.

Ms. Stoic is passionate about introducing young audiences to opera and educating them about classical music. She participated in outreach programs with Cedar Rapids Opera Theatre, Opera Santa Barbara, OPERA Iowa, Opera for the Young, Chicago Opera Playhouse and was a teaching artist with Chicago Opera Theater’s Education program Opera for All. She has received numerous awards from the Bel Canto Foundation, and co-winner of Opera Idol in Evanston.

For the past three years Diana has been sharing her voice through the Songs By Heart Foundation, aiming to improve the quality of life of persons with memory loss through the language and joy of music.  She works as an interactive performer at five different locations in the NW suburbs of Chicago, impacting many people. This important work has been among the most rewarding of her entire performing career.

Ms. Stoic completed her Masters of Music from the Chicago College of Performing Arts and received her Bachelor of Music from Simpson College.  She currently lives in Mount Prospect, IL with her husband, Bass-baritone Dan Richardson and sons, Maxwell and George.

A former Chicago Tribune columnist, Robert Wolf has roamed America for most of his life, writing his version of the American story and getting others to write theirs. In 1990, he established Free River Press, a nonprofit publishing house whose mission is to document contemporary America through writing workshops with people from all walks of life. The press’s workshops and publications have been featured on “CBS News Sunday Morning,” National Public Radio’s “All Things Considered” and “Morning Edition,” and in virtually every major daily newspaper in the country.

In 1994 the Society of Professional Journalists awarded Wolf the Sigma Delta Chi Award for Best Radio Editorial for his six-part essay, “On Developing Regional Rural Economies.” His most recent book is Building the Agricultural City.

After a brief intermission, the OVCO concludes with Symphony No. 2 in D Major by Johannes Brahms.  This virtuosic piece was composed during a visit to a small town in an Austrian province.  Brahms’ second symphony is a lovely four-movement piece sure to be an excellent conclusion to the OVCO’s fifth season.

Founded in 2014 under the direction of Matthew Cody, the Oneota Valley Community Orchestra presents free live classical music to the residents of the Oneota Valley, promotes music education, and provides the opportunity for amateur and professional musicians to perform great masterpieces of music. The fifth season of the OVCO is sponsored by the Marion E. Jerome Foundation and The Depot Outlet.

The OVCO is a 501(c)3 non-profit through the state of Iowa and the federal IRS. All donations are tax deductible.  For more information about the OVCO, visit www.ovcorchestra.org.

Add to Your CalendarAdd to Google Calendar